There are a lot of theories around the benefits of adding stuffing to a sealed subwoofer enclosure. Most contend that stuffing makes the enclosure behave as though it is larger, allowing the woofer to play louder at low frequencies. If this is true, then adding stuffing seems like a great idea. While creating many of our articles, we conduct many low-frequency enclosure simulations in BassBox Pro. Let’s see what the software predicts and then translate that into a real-world experiment with an enclosure in our lab.

Why Do Subwoofers Need Enclosures?

Speakers, specifically subwoofers, need an enclosure to limit cone excursion at extremely low frequencies. Without the added compliance of an enclosure, the subwoofer’s cone could exceed its excursion limits at high power levels and be damaged. Therefore, when designing an enclosure for a vehicle, technicians need to balance the requirements of the subwoofer to hit a target Q-factor and low-frequency cut-off point. The enclosure also needs to ensure adequate power handling and have a volume that will fit in the desired location in the vehicle.

For this experiment, we will use an audiophile-quality 12-inch subwoofer in a sealed enclosure with a net internal volume of 1.358 cubic feet. Before we began any simulations, we measured the Thiele/Small parameters of this particular subwoofer using our Woofer Tester 2.

In terms of specifications, our simulation in BassBox Pro predicts a -3 dB frequency of 40.4 Hz and a Qtc of 0.924. That’s a bit higher of a Q-factor than we’d typically target, but the enclosure will work well in the space we have allotted. Power handling remains well below the 17.6 mm Xmax specification when driven with the 500 watts the subwoofer is rated for.

Cone excursion of our audiophile-grade subwoofer vs. frequency when driven with 500 watts of power.

For reference, we compared the predicted response of our woofer in the 1.35 cubic foot enclosure to the factory-specified 1.02-cubic-foot design. Our larger enclosure will yield 1.6 dB more output at 20 Hz than the smaller design. From that perspective, it’s barely worth the extra space. What we do like is the reduction of the system Qtc from 1.001 down to 0.924. The ideal damping value (Qtc) is considered 0.707. If you’re wondering what speaker or subwoofer Q is all about, give this article a read.

What Does BassBox Pro Predict When We Add Stuffing?

Bassbox Pro includes three options for simulations that include stuffing: Minimal, Normal and Heavy. We repeated the frequency response simulation using these options to see what the software thinks will happen. The results from BassBox show a decrease in the Q-factor of the enclosure

In the un-stuffed enclosure, we see a predicted Qtc of 0.924. In the enclosure with the minimal stuffing, the Qtc drops to 0.906. In the normal scenario, it’s predicted to be 0.837. Finally, in the heavily stuffed enclosure, the Qtc is a well-controlled 0.755. As we aren’t looking for boomy bass, adding lots of stuffing should benefit our application.

Any time you get more output from a subwoofer in a sealed enclosure, there will be a correlating increase in cone excursion. This is true for a decrease in output as well. The graph below shows the effects of simulating different stuffing levels in the software.

Cone excursion increases at very low frequencies with the addition of stuffing in a sealed enclosure.

For this experiment, I bought a pair of the least expensive pillows available at the local Wal-Mart. I think they were $3.99 each. They are listed as weighing 0.56 pound each, so it’s reasonable to assume there is 0.5 pound of the specified polyester stuffing in each of them.

Here are the results. Pleasantly, the predictions from BassBox Pro seem to have panned out, for the most part. The chart below shows the changes to the impedance measurements as we added more stuffing.

With no stuffing, the subwoofer presented an Fs of 43.35 Hz and the enclosure Qtc was 0.9532. With a half pillow’s worth of stuffing, those numbers dropped to 42.5 and 0.9148. A full pillow’s worth of stuffing in this 1.3-cubic-foot enclosure is what I’d consider tightly packed and resulted in the numbers dropping more to 42.1 and 0.919, respectively. By adding any more, I was genuinely concerned that I’d put too much in and that the density would negatively affect the performance of the subwoofer. I was wrong. The Fs dropped once again to 41.7 Hz, and the Qts was now a moderate 0.8397. That’s still a bit higher than I prefer, but the change was impressive and quite beneficial. Our simulation predicted that “normal’ stuffing would yield a Qtc of 0.836. I’ve never put that much stuffing in an enclosure. The take-away is, you need to pack it surprisingly tight.

So, does the addition of stuffing simulate a larger enclosure? It certainly seems so! If we want an unstuffed sealed enclosure for our subwoofer with a Qtc value of 0.8397, it would need to have 2.05 feet of airspace. We have a feeling that the larger empty enclosure is a little louder at the lowest frequencies. Nevertheless, we’ll take this compromise any day!

Look at the four graphs below, specifically at the dips around 180 and 510 Hz in the “empty” image. The interior length of this test enclosure is 26.5 inches, which is the same wavelength as a 512 Hz tone. There is a standing wave in the enclosure. The addition of more and more stuffing slowly reduces both of those little resonances.

Impedance and phase response of the empty enclosure.

Impedance and phase response of the enclosure with a half pillow of stuffing.

Impedance and phase response of the enclosure with a full pillow of stuffing.

Impedance and phase response of the enclosure with 1.5 pillows of stuffing.

These resonances don’t matter much for a subwoofer system where we already have the signal going to the sub attenuated by 20 or 30 dB by 180 Hz. However, if we were building a full-range speaker, the addition of the stuffing would make a noticeable difference in what we hear through the midrange and midbass regions.

The Theory on Subwoofer Enclosure Stuffing

Having a look through the owner’s manual for BassBox Pro reveals two very relevant statements about adding damping or stuffing to an enclosure. First, “the acoustical absorption inside the box will increase,” and second, “the box damping will increase, making the box seem bigger than it really is.” Our results confirm the second statement as being the most significant benefit. It should be noted that just as with a larger enclosure, the maximum output level drops, but so does the Q-factor of the system. For those interested in optimizing sound quality, this would seem like an ideal solution. For bass-heads, you might be better off leaving the interior of the enclosure empty to gain those extra few tenths of a decibel in output and efficiency.

Drop by your local specialty mobile enhancement retailer to have them design and construct a subwoofer enclosure that works perfectly for the subwoofers you’ve chosen and the available space in your vehicle. 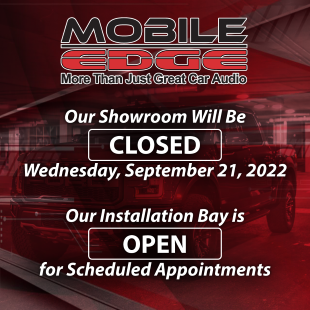 Since 1994, Mobile Edge in Lehighton has been a specialist in mobile electronics, and one of our growing categories is motorcycle audio. Our team is … END_OF_DOCUMENT_TOKEN_TO_BE_REPLACED