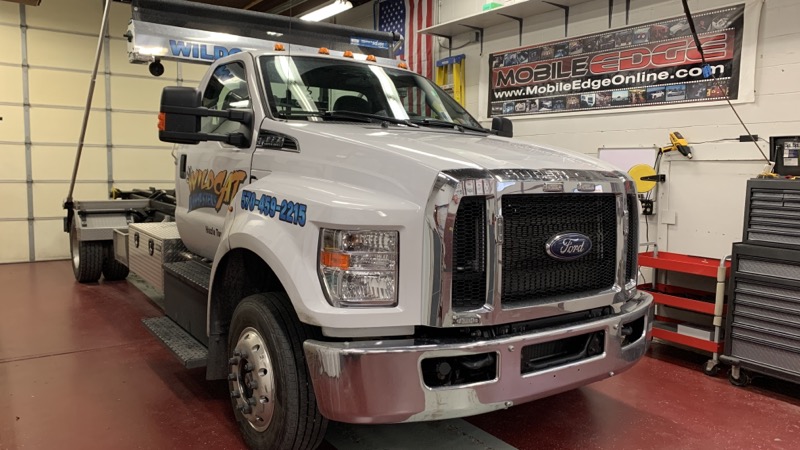 A client from Sugarloaf dropped into Mobile Edge to ask about upgrading his 2022 Ford F-650 work truck with a new radio and a commercial-grade backup camera system. As tough and modern as this Super Duty truck is, the infotainment system is about a decade behind the times. The client wanted a radio with modern smartphone integration features like Apple CarPlay and Android Auto. And because he spends his days loading and unloading dumpsters, a camera system will help save him a great deal of time as well.

We started the project by scheduling a short appointment that allowed our team to check out the wiring in the vehicle. We wanted to make sure the radio and camera could be integrated to make them easy to use. With the electrical connections confirmed, we scheduled an appointment to begin the installation.

The stock infotainment system in the truck left much to be desired.

The chassis of the new radio fits perfectly into the dash of the work truck.

The client was pleased to be able to easily see the backup camera display.

The first step was to remove the factory-installed radio to make way for a Sony XAV-AX8100 multimedia receiver. This radio has features similar to the double-DIN XAV-AX5500 but offers a massive 8.95-inch display that mounts just in front of the dash. The client chose this radio to make the camera image easier to see.

We worked with the tech support team at Metra Electronics to integrate the radio adjustment buttons on the steering wheel with the Sony radio using one of their Axxess ASWC-1 interfaces. We also upgraded the radio with an SXV300V1 SiriusXM satellite radio tuner module that allows the driver to listen to any genre of music or entertainment.

Given the size of this truck, a proper backup safety system is paramount.

The next step was for our team to mount and wire the heavy-duty iBeam TE-CCH camera on the vehicle’s rear. We cut and drilled an aluminum spacer bracket that allowed us to mount the camera just above the license plate. We used stainless steel fasteners to assemble everything. This location affords a clear image of everything behind the truck, even when a dumpster is loaded. It took some time to route the camera cable from the rear of the truck to the cab. We needed to ensure that it was away from the moving components of the roll-off mechanism and would be protected from the elements.

The client was very happy with the new radio and the commercial camera system. If your work truck could benefit from a technology upgrade, drop by Mobile Edge in Lehighton, give us a call or click the red icon below to send our team an e-mail.

Since 1994, Mobile Edge in Lehighton has been a specialist in mobile electronics, and one of our growing categories is motorcycle audio. Our team is … END_OF_DOCUMENT_TOKEN_TO_BE_REPLACED