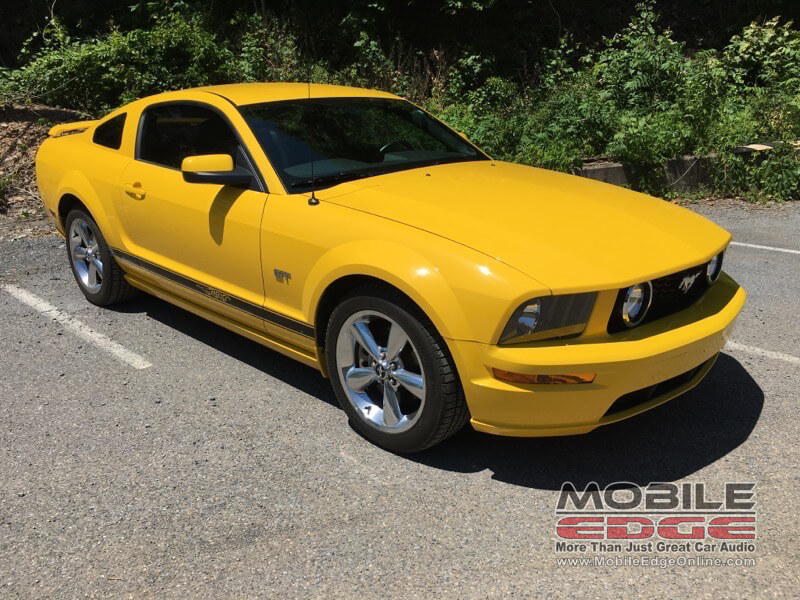 A client from Stroudsburg recently contacted Mobile Edge about installing a backup camera system on his 2006 Ford Mustang. As with most modern pony-cars, rearward visibility is limited. The client wanted to be able to see everything behind the vehicle quickly and easily. After inspecting the car and looking at some camera and monitor options, we designed a solution that would provide the functionality the client wanted.

The camera wiring was neatly routed.

The backup camera mounts above the license plate.

The controller for the camera allows multiple viewing angles to be selected.

The Mustang camera project started with Mike installing an Advent CAM430MV Multiview camera on the rear of the vehicle. The camera includes a bracket that fits on top of the license plate for a clean and tidy installation. Unlike most backup cameras, the driver can switch between an ultra-wide 190-degree panoramic view, a conventional rear-view image, a straight-down view and a split-screen corner view. A small control panel that we mounted to the dash lets the driver switch viewing modes quickly and easily.

Unlike some large cameras that require infrared LED transmitters to produce images when it’s dark, the high-quality 0.5 lux-rated image sensor in the CAM430MV can let you see in almost complete darkness. The 0.5-lux rating is a brightness equivalent to a clear moonlit night.

After mounting the camera, we ran the power and video cable along the factory wire harness and up the A-pillar to the rearview mirror location. 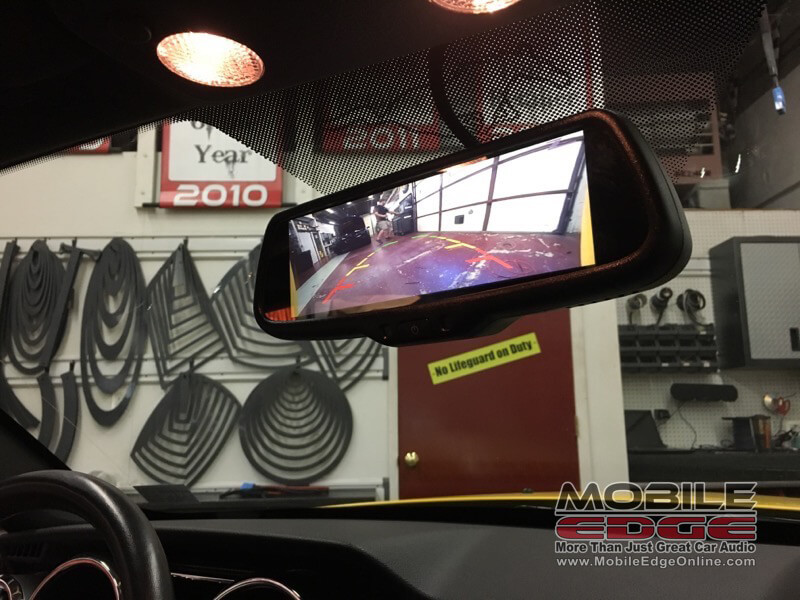 The new mirror provides a large viewing area for the backup camera output.

We removed the factory rearview mirror and replaced it with an AIS ProSeries UM73 mirror that includes a 7.3-inch widescreen LCD screen. When not backing up, the mirror acts like a normal rearview mirror and includes an auto-dimming feature controlled by a light sensor. Once the transmission is in reverse, the camera system is triggered automatically and the image displays on the LCD panel behind the mirror. The UM73 includes a parking line overlay that helps the driver gauge his distance from other vehicles or objects.

With the camera system installed and tested, our installation technicians secured all the wiring to ensure there wouldn’t be any buzzes or rattles while driving. We pulled the car out of the bay and removed our protective seat and steering wheel covers.

The client returned to Mobile Edge in Lehighton, excited to see the new backup camera system in his Ford Mustang. We gave him a tour of the vehicle to show how we mounted the camera and explained how to use the control on the dash to change viewing angles. He was very happy! If you’re interested in a backup camera system for your car or truck, drop by our store or click the red button below to contact us.

Since 1994, Mobile Edge in Lehighton has been a specialist in mobile electronics, and one of our growing categories is motorcycle audio. Our team is … END_OF_DOCUMENT_TOKEN_TO_BE_REPLACED