You are here: Home / 25th Anniversary / Bob Mickonis: A Love of Cars Leads to A Long Stint at Mobile Edge 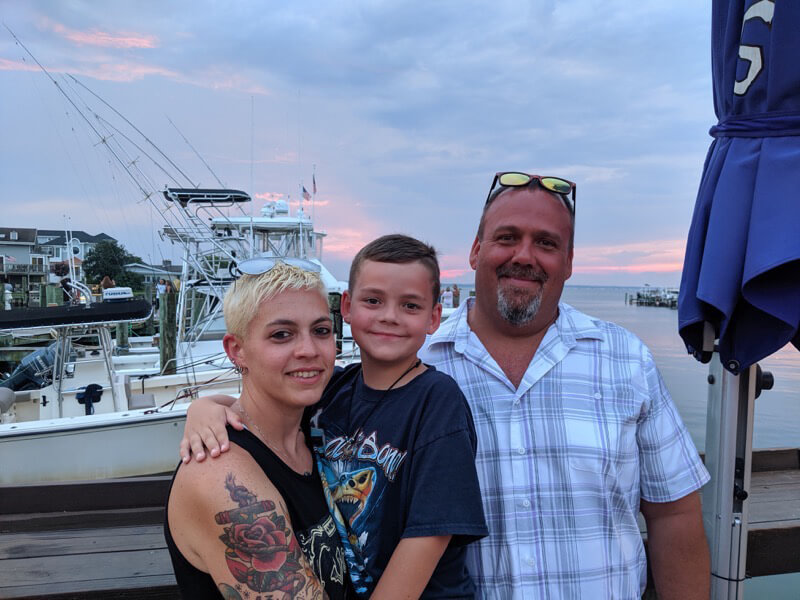 Bob worked at Mobile Edge for 15 years and it was a pleasure to watch him evolve as not only an employee but as a person.  One of the best experiences was seeing the great father that Bob instantly became after Robby was born.  It was very difficult when Bob let me know that he was moving to Virginia Beach but it was clear that this was what he needed to do for his family.  Seeing all of his beachside adventures makes it obvious that he made the right choice!

Unlike the management team that came before him at Mobile Edge in Lehighton, Bob Mickonis’s experience in the automotive industry wasn’t based on electronics — he was a car guy. With years of work in maintaining trucks during high school and running an auto parts store, Bob had hands-on experience with vehicles that made him an impressive asset to the store.

The Years Before Mobile Edge

Bob worked for a trucking company on evenings and weekends while he was in high school, helping care for their fleet of about 40 trucks. Bob would do oil changes and replace worn tires to ensure the rigs were ready for their runs back and forth from New England to Florida each week. When a new truck came to the fleet, Bob would help install CB radios, lighting and any other electronic accessories they required.

When Bob graduated from high school in 1994, he enrolled at a local community college and picked up a job working at an auto parts store in Lansford as a delivery driver. At the time, he wasn’t much interested in schooling — getting a paycheck was definitely more alluring than sitting in class. When Bob was 23 years old, the owner of the store died. The owner’s wife had no interest in keeping the store, so Bob and a friend decided to buy it. They were doing well, but late in 2000, the economy took a dive. In addition, a big box outfit opened a shop down the road. Things weren’t looking good for the small “privateer” auto parts business.

Bob and his friend took to installing automotive accessories for financial support. They installed body kits and under-car lighting to coincide with the sport compact craze that was spurred by the 2001 debut of “The Fast and the Furious” movie. The lifestyle was fun, but it wasn’t profitable enough, and after a while, Bob found himself bouncing around from shop to shop, doing maintenance and repair work.

Finding a Job at Mobile Edge 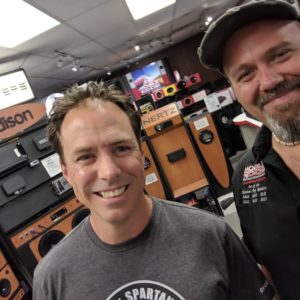 Mitch and Bob on one of Bob’s last days at Mobile Edge.

In 2003, Bob saw a vague newspaper advertisement saying that a local shop was looking for a mobile electronics installer. Bob vividly remembers that there was no store name associated with the ad, but as he was typing the phone number into the fax machine to send his résumé, the call display function came up with Mobile Edge. He canceled the fax transmission and headed to the store in person to apply. Mitch told Bob that his experience with automotive mechanics made him overqualified for the position, but Bob’s determination and reputation for honesty eventually landed him the job as an installer.

The popularity of mobile audio upgrades was very strong in the early 2000s. Bob worked with another installer, sharing the tasks of installing custom audio systems and electronic accessories in vehicles. After a few years, Bob got a chance to spend time on the sales floor. His experience with the public and approachable demeanor were popular with clients. 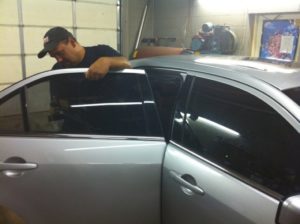 Bob was the window tinting department at Mobile Edge for several years.

Around 2005, Bob suggested that Mobile Edge could entice an entirely new client base into the store if they were to offer window tinting. Mitch agreed and brought a trainer to the store for three days to teach the team how to tint. The process clicked with Bob and he became the sole window tint installer for the store.

In 2009, Mobile Edge was nominated for Mobile Electronics Magazine Retailer of the Year and the team created a grand presentation in hopes of receiving this prestigious award. They took the runner-up, losing to JC Audio out of Nashville, TN. Mitch took this “near miss” as an opportunity to refocus and try again for 2010. New plans, new strategies and processes combined to garner them with the 2010 Retailer of the Year award. Bob and Mitch had achieved the car audio equivalent of winning the Superbowl!

In 2012, Mitch went to an industry event called Knowledgest. While at the show, he talked to people like Josh Landau and Jon Webb about how they run their shops and some of the processes and procedures they use day to day. Bob noted that he has a vivid memory of Mitch calling him from the show with a list of upgrades and changes he wanted to make to further improve the business. They set to work upgrading the store with epoxy floors in the installation bay. They also built a dedicated wood and fabrication shop and equipped it with a table saw, router lift and a welder to make their now-trademark amp racks.

Bob and Mitch tweaked and evolved their processes over the years and kept their small business in a tiny town in Pennsylvania running smoothly when most others would have given up. Bob suggested bringing in truck accessories as another category in hopes of further opportunities. The plan once again worked and truck clients bought audio, remote starters and safety solutions.

In June 2017, Bob’s father passed away. As you can imagine, something like this is very hard to cope with. A few days later, as Bob was sifting through the hundreds of well-wishes on Facebook, he noticed that an industry friend had suffered the same loss on the same day. Ethan Blau, the owner of Sound Wave Customs, had also lost his father. The two guys talked on the phone and made plans to get together for a few days near Ethan’s home in Virginia Beach.

Bob and Ethan talked often over the next few months and Ethan eventually offered Bob a position at his store. Bob was immediately torn between his 15 years of work with and dedication to Mobile Edge, and his friendship with Mitch, versus an opportunity of a lifetime to live and work near the beach.

“I was up late one night, sitting in the kitchen pondering what I wanted to do,” Bob says. “I heard a crash from the living room and upon inspection, I found a framed picture had fallen off the wall. In the middle of the frame was a photo of me with my brother on my shoulders, on a boardwalk by the ocean. This might have been coincidence or fate, but I took it as a kick to make a decision.” 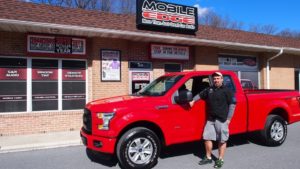 Bob was thrilled to call the Mobile Edge demo truck his daily driver!

He talked to his girlfriend Kelly and she was excited about moving away from the snow and slush of Pennsylvania winters. Bob let Mitch know in June that he wanted to accept the job offer from Ethan and make the move before the school year started for their son Robby.

Over the years, Bob had joked with Mitch that he’d stay with him as long as he didn’t get an offer to move to the beach. Mitch understood how important this was to Bob and, as any good boss would, wished him well and supported him through the transition.

Bob now lives less than a mile from the ocean. He often rides his bike to the shore before or after work for a walk on the beach. He also told me that he has finally become accustomed to the fighter jets taking off from Naval Air Station Oceana about a mile to the west of his house. 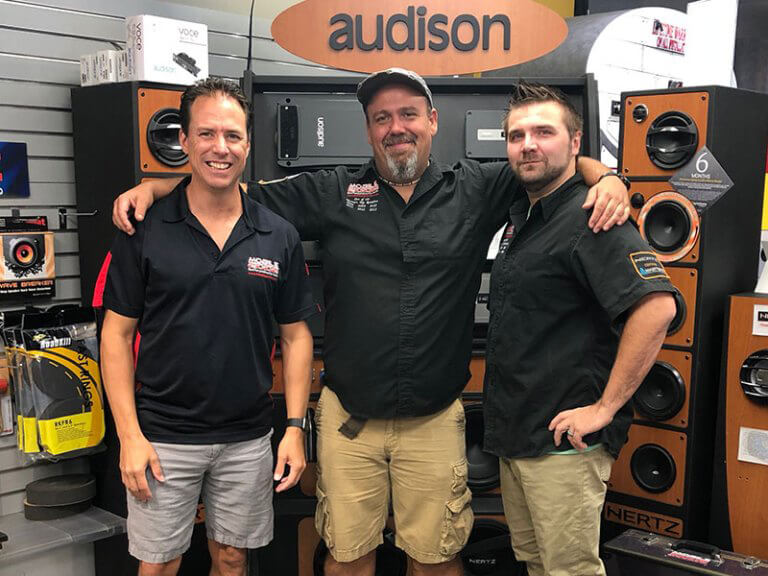 Mitch and Bob with our newest store manager Michael Oechsner

Bob is now operations manager for Sound Wave Customs and balances his time between marketing and work on the shop’s laser and in the fabrication room. As much as he loves the new opportunities and amazing environment, though, he’s proud that Mobile Edge is celebrating their 25th anniversary. “I was honored to be a part of its growth,” he says. “Mobile Edge will always be an important part of my life and I miss working with Mitch, Mike and Ben.”

Since 1994, Mobile Edge in Lehighton has been a specialist in mobile electronics, and one of our growing categories is motorcycle audio. Our team is … END_OF_DOCUMENT_TOKEN_TO_BE_REPLACED