You are here: Home / ARTICLES / The Many Benefits of Installing Window Film on Your Vehicle 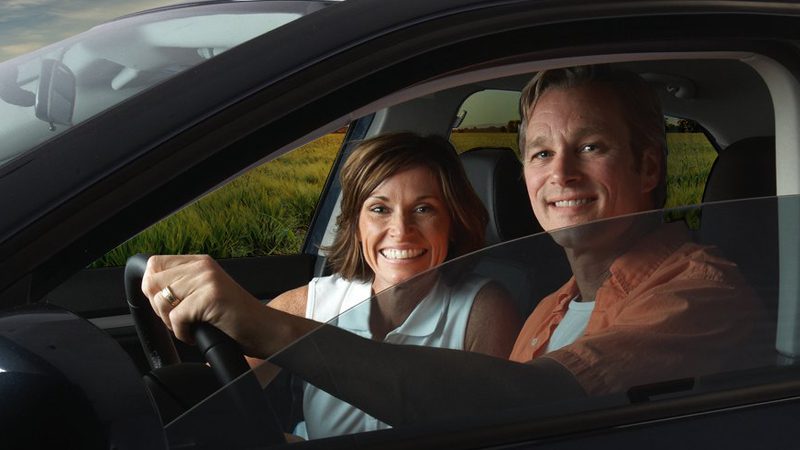 Automotive window film has been around for more than 50 years. What started as a spray-on process to add privacy has evolved dramatically over the past few decades. Modern window films offer amazing optical clarity, excellent heat rejection, reduced glare and improved occupant protection. Let’s look at what this technology is and some of the reasons why people tint their windows.

What Is Window Film?

Most window films are made from a thin polyester sheet with layers of a proprietary mixture of coatings. These coating materials offer UV-, IR- and light-blocking properties. Window films are applied directly to the inside surface of the glass and include an adhesive to ensure they stay in place. High-quality films are designed not to fade or change color over their lives. These quality adhesives will not break down and cause the film to release over time.

The typical facility that sells and installs window film may carry as many as four of five different grades of film. Each grade often has several different light transmission levels available. Films are rated by the percentage of visible light that they allow to pass. A 15 percent film only lets 15% of the light directed at the film pass through. A 5% film would be very dark, while a 70% film is very light.

Why Use Window Film?

There are four main reasons to use window film or tint on your vehicle: There is no doubt that a vehicle with professionally installed window tint looks cool. A white car with a dark tint evokes the “stormtrooper” look, while a dark paint color with tinted windows and no chrome is an amazing “blacked out” style. Whatever your preference, tinting your windows can have a dramatic effect on the style of your vehicle.

Windows films that protect the vehicle and its occupants are steadily growing in popularity. There are security films designed specifically to adhere firmly to the tempered glass of side and rear windows. These films keep the window intact in an accident or an attempted “break and enter.” If you are concerned about attempted break-ins, ask your local window tint specialist about security films. A heat lamp display, such as this one at Window Tint School allows you to not only see the difference in the light transmission, but also feel the heat reduction.

One of the most popular reasons to tint your windows is to help keep the interior of your vehicle cool. The key to succeeding at this goal is to request a good-quality window film. These thermal blocking films are often called “nano” or “ceramic.”

Think about just how much glass there is in the average vehicle. What does your steering wheel feel like when you get in the car on a hot summer day? In most cases, you can barely touch it! Premium films are designed to block heat, not just light. They not only help keep your car cooler, but they ease the load on your air conditioning system. That can directly translate into savings in fuel costs.

When it comes to blocking heat, the amount of light the film transmits is not the only criterion. Many shops will have a way to demonstrate the capabilities of heat-blocking films, often using a heat lamp display of some sort. There are 5% films that use dyes that barely block any heat. At the other end of the spectrum, there are films that allow more than 70% of light to pass, but block 50% of the heat from the sun. The Skin Cancer Foundation has released an article about the benefits of window films that are designed to block UV rays. UVA and UVB rays are what cause sunburns and eye damage. Conventional glass blocks the transmission of UVB radiation, but UVA rays can pass through effectively unhindered. These protective films can block up to 97% of UVA rays. Unlike traditional films, many of these UV-blocking films offer excellent light transmission characteristics. As much as 93% of visible light can be transmitted, making them suitable for use on windshields in some areas. The best of these films offer an equivalent Sun Protection Factor (SPF) of up to 1,000. If you spend a lot of time in your vehicle, then you should look into UV-blocking films.

We have all seen pictures of cracked vinyl dashboards in our favorite ’70s and ’80s cars. The same window film protection characteristics that protect you also protect your vehicle. Plastic, vinyl, rubber and cloth are all susceptible to damage and fading caused by UV exposure. A quality window film keeps your car interior not only cool, but looking great for years. It is best to seek out a professional installer to have window film installed. They are trained in techniques to ensure that the film is cut and shrunk to fit the glass perfectly. The difference between a do-it-yourself job and a professional installation extends far beyond the initial result. Proper installation techniques ensure that no fingerprints, dust or debris get caught under the film. A proper installation will last longer because it adheres to the glass better. The film won’t peel or pull away from the edges or defroster lines.

If you are interested in having your windows tinted, check with your local tinting professionals. Ask to see examples of their work, and be sure to discuss different qualities of film and ask about their thermal, UV and light transmission capabilities. Modern window films are amazing feats of engineering that can protect you and your vehicle while making it look awesome.

Since 1994, Mobile Edge in Lehighton has been a specialist in mobile electronics, and one of our growing categories is motorcycle audio. Our team is … END_OF_DOCUMENT_TOKEN_TO_BE_REPLACED