Mike is an avid fisherman and has been known to land some big ones.

Mike always has the unique ability to be happy and smiling no matter what is going on in his life. He continues to be caring and loyal to those who are lucky enough to call him a friend. I’m very thankful that our paths crossed and that Mike and I have remained good friends throughout the years. We certainly have many “interesting” memories to look back on! 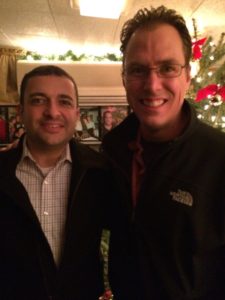 For many teenagers in the ’90s, once they had access to a car, upgrading the stereo system became a focal point of their high school years. Mike was no different, and like many of his friends, he’d install speakers, amplifiers and subwoofers in his and his friends’ cars once they scraped up enough money to buy the equipment they wanted. Mike saw the stereo system in his car as a great way to get into the mobile enhancement industry.

Once he was done with high school, Mike chose to take the mobile electronics course at Luzerne County Community College. At the time, no other colleges in the country offered this program. After graduating, he started looking for a job in the car audio industry in the Hazelton area. One day, he found himself about 40 miles away in Lehighton and saw Schaffer’s Safe and Sound on Blakeslee Blvd. He decided to drop in and see if they had any job opportunities. At the time, Mitch Schaffer, the owner of Schaffer’s Safe and Sound, told Mike that he wasn’t hiring, but asked him to leave his contact information.

A few weeks later, Mitch called Mike and invited him to take a trial run at installing to see if he’d be a good fit for the company. Mike’s experience and education paid off, and he was hired as an installer and the first employee at Schaffer’s Safe and Sound.

If you ask anyone who has been in the mobile enhancement industry for a while when things were at their peak, they’ll tell you it was the ’90s. Car audio wasn’t just something people wanted; it was something people were passionate about. High school and college students would work to out-do their friends in terms of elaborate sound systems, and car audio competitions were both common and well-attended.

Schaffer’s Safe and Sound was like most car stereo shops in that era: They sold radios, speakers, amplifiers and subwoofers to music enthusiasts. They also sold a lot of pagers and cellphones. Remote car starters were steadily gaining popularity with consumers. The store partnered with Astro Start to provide the convenience of being able to start a vehicle so it could warm up in the winter before the driver got in.

Schaffer’s Safe and Sound was an Alpine, Eclipse and Orion dealer. Mike installed hundreds of Cobalt, XTR and HCCA amplifiers and even more Cobalt and XTR subwoofers. He also did some basic custom work, creating carpet, fabric and vinyl-wrapped door and trim panels as needed to make installations look great.

With the store being a two-man operation and Mitch also owning and operating an attached Texaco gas station, Mike would often get called on to fill propane tanks for clients. Mike also helped out with sales in the store when Mitch was busy.

Life after Schaffer’s Safe and Sound

Mike worked for Mitch from 1995 through to 1998, when Mike’s family decided to move to York, PA. “I vividly recall the going-away party Mitch held for me,” he recalls. “I drank more than enough Long Island iced teas. The evening, of course, ended with the gang getting stopped at a police checkpoint to ensure the driver was sober. As luck would have it, I was sick to my stomach just as we approached the officer. Unimpressed with the antics, the officer told me that he could issue him a ticket for littering. I replied that he couldn’t because vomit was biodegradable. We were sent on our way with no further questioning.”

When Mike arrived in York, he got a job with the national electronics chain Tweeter as a mobile electronics specialist. After a few years, he was promoted to regional sales manager for car audio and was responsible for 12 Tweeter stores in the Chicago area. Tweeter closed all of their stores 10 years later, and Mike decided that he’d take some time off from working to travel across the country. 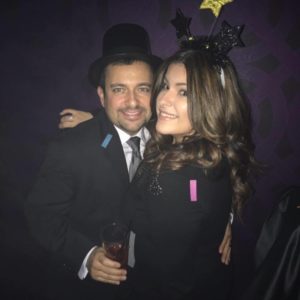 Mike and his wife Lori.

“I was an avid poker player and my plan was to see how far I could get on my winnings alone,” Mike says. He sold his house in Chicago and set off for California. He made it to San Diego before spending all of his winnings and effectively ran out of money. He dipped into a reserve bank account and headed to Las Vegas. In under a week, he made back all the money that he had lost. Once he was comfortable financially, he headed for Texas.

When Mike returned from his cross-country adventure, he met Lori. Mike and Lori dated for several years, and got married on February 2, 2013.

Meanwhile, Mike had accepted a job offer as a dealer at a casino in Atlantic City. Over the next nine years, he was promoted to lead shift manager of the poker room at Bally’s, where he was responsible for staffing, security and profitability.

What’s Mike Tarud up to Today? 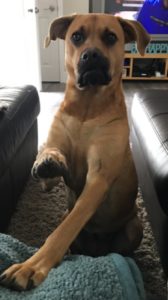 These days, Mike lives with his wife and their rescue dog Lilo in Absecon, NJ. In 2017, he resigned from the casino and started an in-home construction company — he had been doing some construction work part-time but wanted to be his own boss. His company does bathroom, kitchen and flooring renovations in the Atlantic County area of Southern New Jersey. The company is fully licensed and insured. His training as a mobile electronics installer and fabricator serves him well and gives him a unique set of troubleshooting and design skills to serve his clients.

Mike happily admits to being addicted to fishing and spends whatever free time he has on the water. He and Mitch remain great friends, and their families get together whenever possible.

Dave has worked in the Mobile Electronics industry since 1988 in almost every capacity including roles as a retail salesperson, installer, sales representative, product manager and a technical trainer for some of the largest car audio companies in the world. Dave started his writing career in 2000 as the Technical Editor of a Toronto-based car audio magazine. Formally trained as an electronics technician, Dave is considered an industry expert when it comes to explaining how mobile audio components work.

Since 1994, Mobile Edge in Lehighton has been a specialist in mobile electronics, and one of our growing categories is motorcycle audio. Our team is … END_OF_DOCUMENT_TOKEN_TO_BE_REPLACED