Rarely does a week go by that we don’t have a customer bring in a “monster” amp and wanting a wire kit or subs to go with it. Printed clearly on the amp are the words 1000 WATTS or 2000 WATTS. We’ve even seen “5000 WATT” amps! Usually these amps were purchased at a truckload sale, flea market, or discount superstore. They are typically very inexpensive, usually under $150. Do you think that these amps can produce 5000, 2000 or even 1000 watts? Mobile Edge recently tested one of these “2000 Watt” amps from a company called Boss along with a Memphis PR1x1000 amp and we had some eye-opening results!

Without switching on our Oscilloscope we could clearly tell you that the Boss amplifier is not capable of producing even the 1000 Watts that the manufacturer claims.  How do we know this?  All you need to do is look at the fusing.  Fuses are designed to limit the amount of current that the amplifier can take in (in part to protect the amp).  Simple physics says that if the input is limited, so will the output. The Boss CX2000M is fused at 50 amps.   Using the formula below, you will find that the amp could not produce more than about 405 watts of sustained power. The formula for determining power is:

For our purposes, we will use a DC voltage of 13.5 which is typical of a vehicle’s alternator (and will be referenced below).  AB Amplifiers typically are between 50 and 60% efficient. We can give the Boss amp the benefit of the doubt and go with 60%  Plugging in the numbers we get:

Under most circumstances, this amplifier could not produce more than 405 watts for a sustained period without blowing fuses.  This is quite a bit less than the 2000 watts on its label! 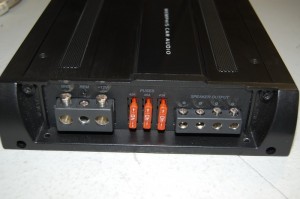 For class D amplifiers, you use an efficiency constant of about 80%

Assuming the same input voltage of 13.5V and 120 amps of current draw, we can plug in the numbers:

The maximum sustained power that the Memphis PR1X1000 should be able to produce before the fuses blow is about 1296 watts.  Nearly 30% more than the manufacture specifies. 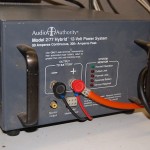 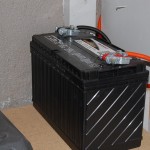 There are several tools that are needed to properly test the output of an amplifier.  First of all, you need a solid power supply.  We’ve got this covered with a 50 amp Power supply charging a series 31 1000 CCA farm and truck battery.  This setup gives us the power we need to test all but the largest amplifiers without worrying about significant voltage drops. 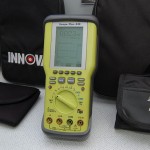 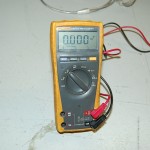 We use a TPI440 Oscilloscope to see where the signal clips and read the voltage just before clipping. This gets connected to the speaker outputs of the amplifier.  A Fluke Digital Volt Meter is used to measure and monitor the input voltage throughout the testing.   These units are considered industry standards and are used on a daily basis at Mobile Edge.  They are used for everything from system setup to circuit testing and signal identification when doing OEM integration work. 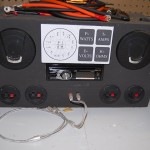 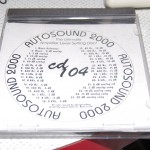 We use a standard JVC cd player to supply the signal.  Our test bench has a complete Ohms Law pie chart for quick conversion of volts, amps, watts, etc!  Test tones are generated by the CD104 Test CD.  This disc has been used since the early 90’s for system setup.  For our test on these amplifiers we will be playing a 40 hZ test tone.  Every good shop has at least one copy of this CD if not more! 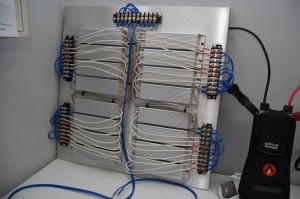 This is a custom bank of 16 four ohm, 100 watt resistors.  We have 4 banks of 4 resistors each and they can be wired to derive a 1, 2 or 4 ohm load.  This “dummy load” does a decent job of simulating a speaker.  While a speaker is a reactive load and this is not, it gets us into the ball park.  We have it mounted to a 3/8 piece of aluminum to help disperse heat.  When used for a time, these guys get hot!

Aside from testing amplifiers, we use this during system setup.  It takes the place of a speaker during the earlier stages of tuning.  This way we don’t need to be blasted out for hours while setting up a system not to mention it allows the new speakers to be broken in more gently!

The first thing that we do to test the amplifier is to determine the clipping point of the head unit’s RCA leads.  We want a strong undistorted signal going to the amp.  Once we find the clipping point of the deck, we back down the volume slightly until there is no distortion.  The amplifier testing is done with the volume set at this level. (Note that this step was not shown in the above video but described in this link)

We use the CD104 test cd and set it for the 40hZ track.  The CD player is set to repeat this track over and over.

After hooking up the amplifier, we set the gain to minimum, crossover point to about 100hZ and all subsonic filters and bass boosts to off/min.  The amplifier is connected to the dummy load.  In the case of the Boss CX2000m amplifier, we wire the load for 2 ohms.  The manufacturer states that the amp is not stable at 1 ohm thus producing max power at 2 ohms.  For the Memphis PR1X1000, we wire it for 1 ohm since this amp is stable at 1 ohm.

The next step is to test the supply voltage.  In each case, the input voltage tested at right around 13.5 Volts.  This is a very common voltage range found in vehicles while running.

Finally the oscilloscope is hooked up to the speaker outputs of the amp and set for AC voltage (speaker outputs are AC).  The Oscope will show the frequency, in this case 40hZ along with the voltage.  It also shows the waveform being generated by the amplifier.

We slowly turn up the gain control on the amplifier and watch the waveform.  Eventually, the waveform will start to distort or flatten out.  This indicates distortion or clipping and that the signal is no longer clean.  We back the gain off slightly until the waveform is clean again and read the voltage.

In the case of the Memphis amplifier, the undistorted voltage was 34.9 volts.

This formula for power is simple and the same whether  Class AB or Class D:

(Test was done with amp wired to a 1 ohm load)

Do the math and you will find that the Memphis amp produced 1218 watts.  That is 121.8% of the power that the manufacturer states in their literature, manuals and website.

The Boss amp did not fare so well.  When tested, it produce an undistorted 25.11 volts.

(Test was done with amp wired to a 2 ohm load)

The Insides of the Amplifiers

We thought it would be interesting to take the amplifiers apart and see what they looked like inside.  The CX2000M is much larger and noticeably lighter than the Memphis PR1X1000.

The Memphis PR1X1000 on the Left and the Boss CX2000M on the right. Both have the lids off to expose the insides.

It is easy to see that there is a lot more going on inside of the Memphis amp.  There is not a lot of space.  That is not the case with the Boss amp. Inside the CX2000M you’ve got plenty of room! 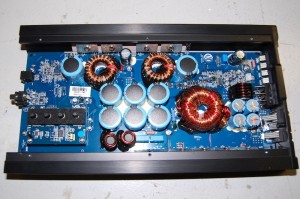 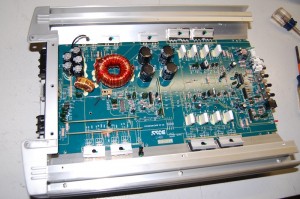 This post and test was not meant to put down any specific amplifier.  The only reason that we used the Boss amp was because a good customer had one lying around and volunteered it’s use.  The purpose is to point out that not everything is as it seems in the world of car audio.  There is no required governing body for car audio ratings.  There are no testing laboratories that manufacturers have to send their equipment to.  Any manufacturer can claim any power rating that they want.  It’s that simple. (It is important to note that there is an industry standard called CEA 2006-B.  Manufacturers are not required to take part in it.  When comparing 2 amplifiers that are rated by CEA 2006-B guidelines you can get a good apples to apples comparison. Also, almost all of the reputable industry manufacturers use Cogent Laboratories in Chandler, Az for their testing and independent validation.)

The Memphis amplifier clearly puts out nearly 4 times the power of the boss amp yet both manufacturers claim 1000 watts.  The Memphis amp exceeds this rating and the Boss amp barely puts out 30% of the claim.  When making a purchasing decision, it is important to understand the quality of the product you are buying.  It is important to trust the product and the retailer you are buying from.

Imagine if the customer that bought the “2000 watt” amp decided to go out and get two subs that could really handle 1000 watts each.  They would be wasting an obscene amount of money BIG subs and the end result would be very poor.    What they really should get are two 150-200 watt subs.

I know that the argument can be made that the Memphis amp is more expensive than the Boss amp.  This is absolutely true.  A quality product that produces lots of power costs more money to build. If you look at typical street costs for each of these amps and do the math, you will see that the Memphis amp is much cheaper when you consider dollar per watt.  Also important is the dealer selling the product.  It is unlikely that the flea market vendor or discount superstore employee selling the “monster 2000 watt” amps will be able to provide the expertise necessary to design and build a great system.  But I’d bet your local Memphis or Hertz/Audison dealer will!

All that aside, don’t you like the idea of getting 21.8% more than what you are promised?

I welcome your reasoned and well thought out comments!

Since 1994, Mobile Edge in Lehighton has been a specialist in mobile electronics, and one of our growing categories is motorcycle audio. Our team is … END_OF_DOCUMENT_TOKEN_TO_BE_REPLACED