A client from Bethlehem contacted the team at Mobile Edge about upgrading the stereo system in his 2002 Pontiac Firebird. He wanted an audio system that would play loudly enough to be clear when he had the T-roof out and deliver good, solid bass performance. He also wanted to modernize the technology in the vehicle so that he could use his smartphone for communication and entertainment when driving. Our team went through a few options with the client and showed him radio, speaker and subwoofer options on our interactive displays.

Our installers made sure the radio was securely mounted in the dash.

The Sony radio has a clean style with an intuitive interface.

The first step was to replace the radio in the dash of the Firebird. The client chose a Sony XAV-AX5000 multimedia receiver for its intuitive interface and clean styling. The radio includes both Apple CarPlay and Android Auto smartphone integration. These technologies allow the client to use voice commands to make phone calls, send text messages or choose from dozens of audio streaming, podcast and audiobook sources. He can also get detailed turn-by-turn navigation instructions using Waze or Google Maps to anywhere in North America.

Our installers ensured the amplifier was mounted safely and securely behind the spare tire in the trunk.

The amplifier is mounted behind the spare tire, so that it remains fully accessible in the event of a flat.

The Hertz subwoofer is installed in an enclosure built specifically for the vehicle.

Storage on the trunk floor for the T-tops remains untouched and available.

The Sony radio feeds a Hertz HCP 5D five-channel amplifier. We mounted the amplifier behind the spare tire in the right rear corner of the car. Thus, the spare tire remains fully accessible in the event of an emergency. This five-channel amp can produce up to 65 watts of power to the main speakers and 330 watts to a subwoofer, all from a single chassis. We used Audison Connection four-AWG power and ground cable to feed power from the battery to the amplifier.

On the other side of the trunk, we installed a Hertz Dieci-Series DS 25.3 10-inch subwoofer in an enclosure that fits perfectly under the driver’s side trim panel in the trunk. The subwoofer faces inward toward the center of the vehicle and doesn’t interfere with the storage for the T-tops on the trunk floor.

The final upgrade was to replace the door speakers with a set of Sony XS-GS1621 6.5-inch speakers. These speakers can handle all the power from the amp while delivering clean and detailed sound. 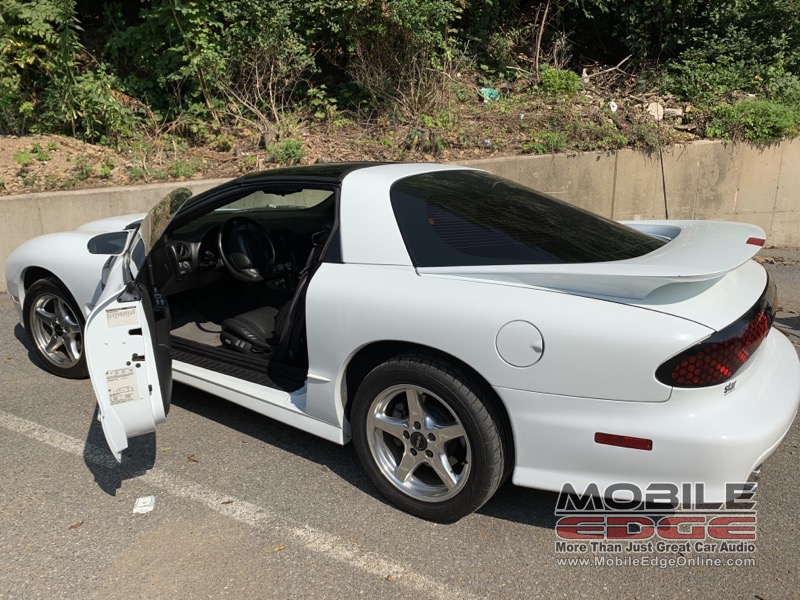 The client is happy with the new stereo in the Firebird.

After a long day’s work, we had all the new stereo equipment installed in this Pontiac Firebird, and the system was dialed in to sound amazing. The client returned to Mobile Edge in Lehighton to pick up the car and was thrilled with how it sounded. We helped him pair his smartphone to the radio and showed him how to use the smartphone integration.

If you’re interested in upgrading the audio system or the technology in your car or truck, drop by our store, give us a call or send our team an e-mail using the red icon below.

Since 1994, Mobile Edge in Lehighton has been a specialist in mobile electronics, and one of our growing categories is motorcycle audio. Our team is … END_OF_DOCUMENT_TOKEN_TO_BE_REPLACED