You are here: Home / 25th Anniversary / Ben Tuckett: A Young Man With a Strong Work Ethic and Desire to Learn

Ben gives me a lot of hope for our future.  As a young man in his 20’s, Ben has a tremendous work ethic.  He is always on time, always willing to stay late to finish a project, never calls off when he doesn’t feel good and he never makes excuses.  He has a real desire to learn and he takes great pride in his work.  He had some big shoes to fill and he has not let me down. Ben fits in perfectly at Mobile Edge.

While Ben Tuckett may be the “baby” of the Mobile Edge family, his dedication to learning the craft of car audio installation technician has earned him a great deal of respect from his coworkers and peers. Ben has been with Mobile Edge since April of 2017 as an employee, but his history with the company goes back many years.

Another Victim of the High School Car Audio Bug 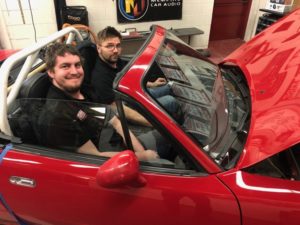 Ben and Mike auditioning one of their creations!

As seems to be the case for many employees at Mobile Edge, Ben’s first exposure to car audio came from a friend while in high school. His friend Bobby wanted to buy new speakers for his Subaru and the two set out to visit Mitch’s shop in Lehighton. As soon as Ben walked in the door, he knew he wanted to work there.

After high school, Ben attended Lehigh Carbon Community College and took classes in mechanical and electrical engineering. While there, he participated in the SHINE after-school program as a teacher. SHINE helps students in grades six through nine learn about the importance of hands-on education. The program focuses on science, technology, engineering, arts and mathematics (STEAM). Over the course of the program, Ben and his students built a fully functional hovercraft. Imagine being able to put that on your résumé!

Of course, Ben would help his friends upgrade their vehicles with audio systems and bolt-on accessories in his spare time. Whenever someone needed audio equipment, he would accompany them to Mobile Edge, where Bob Mickonis would ensure they got the right products for their applications and expectations.

In terms of his career, Ben was working at Amazon. His hard work quickly ensured promotion through the ranks, but he reached a point where the work became tedious and repetitive, with no room for creativity. One day, Ben decided that he’d act on his long-term plan of getting a job at Mobile Edge and made a bee-line for the shop to talk to Bob. Bob told him that the shop was looking to hire a junior technician and asked Ben to leave a copy of his résumé. After Bob reviewed his training and experience with Mitch, Ben got his dream: They offered him a job.

Learning the Ropes at Mobile Edge 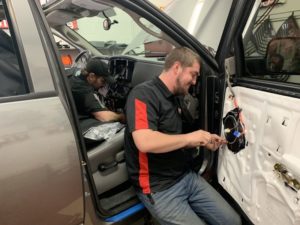 Ben and Mike working on an audio upgrade in a pickup truck.

Ben worked closely with Mike Oechsner and Bob Mickonis to learn the ins and outs of proper audio system design and installation, and remote car starter integration. Mike’s attention to detail serves as the shop’s standard, and Ben quickly adopted that as his reference.

In 2018, Bob left for a job in Virginia Beach and Ben stepped up to handle all window tint installations. Mitch brought in a trainer from 3M to ensure that Ben’s technique and process were on point, but not surprisingly for someone with a knack for hands-on processes, he didn’t need much in the way of adjustment to the process.

According to Mike, Ben is great to work with. “He listens to direction and can work independently and reliably,” Mike said. “I never feel like I have to watch over Ben’s shoulder for fear of him taking a shortcut. If I make a suggestion for improving a process or procedure, it sticks and Ben never has to be reminded.” That is high praise from someone who has been doing this for so long. 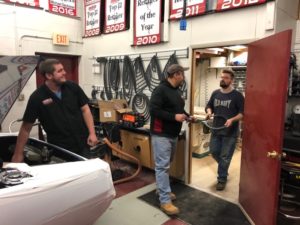 Ben, Bob, and Mike working together on a fabrication project.

When asked what he likes most about working at Mobile Edge, Ben said it’s upgrading the client’s car stereo systems. “Whether it’s a new set of speakers, adding a subwoofer or tuning the system with a DSP, being able to make the music they enjoy sound better is rewarding,” he says. A recent project on a 1970 Dodge Charger was one of the more memorable vehicles he’s had the opportunity to work on, since he loves older cars. “This black beauty was built to replicate the Charger that Dominic Toretto drove in ‘The Fast and The Furious,’” he says.

Ben is looking forward to learning more about fabrication efficiency to take some of the load off Mike as he manages the various aspects of the store. Once he has a solid foundation, he’s excited to be able to apply some of his creativity to the installations he performs. 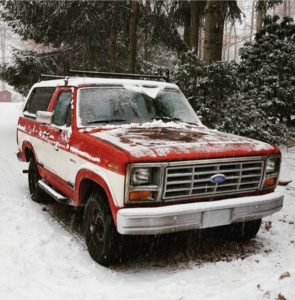 When not at the shop, Ben says he likes to spend time outside. He goes on bike rides, kayaking or shooting in the range he’s built in his backyard. He loves spending time around campfires with friends and enjoys cooking on the BBQ. He also takes his work with him, in a way: He’s working on getting a 1985 Ford Bronco up and running, but made it clear that the audio system is already finished. It’s good to hear he has his priorities straight!

Speaking of vehicles, Ben and Mike are working on transforming Ben’s 2007 Subaru Impreza into a demo vehicle for the shop. The system will be based around an Audison AV5.1k Voce-Series amplifier and a bit Nove digital signal processor. Hertz speakers and subwoofers, and a custom installation, will not only maximize its performance, but show off the store’s capabilities.

Ben clearly loves working at Mobile Edge in Lehighton and his passion for the mobile enhancement industry is equally clear. We’re sure that he’ll be in the industry for a long time.

Since 1994, Mobile Edge in Lehighton has been a specialist in mobile electronics, and one of our growing categories is motorcycle audio. Our team is … END_OF_DOCUMENT_TOKEN_TO_BE_REPLACED