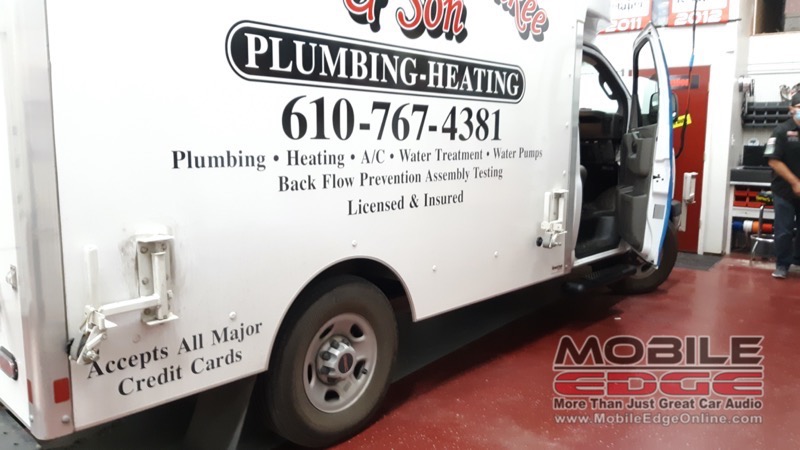 The owner of this 2019 GMC Savana work van recently dropped by Mobile Edge in Lehighton to ask about adding a safety camera system and upgrading the stereo. We’ve worked with this Walnutport resident before and were thrilled that we could upgrade his work van. After inspecting the vehicle and talking to the client about his goals and expectations for the upgrades, we put together a custom solution that would give him the peace of mind and audio performance he wanted.

The unique rear camera was mounted over the back doors.

The forward firing camera records video in and out of the van.

A front mounted camera was added below the GMC badge.

The first step in upgrading this Savana was to install a commercial-grade video recording system. The truck already had a backup camera that is integrated into a rearview mirror. While convenient, he wanted something that would capture what was happening in front of, behind and inside the vehicle, even if it wasn’t being driven.

We started by mounting an iBeam TE-CDVR-4 four-channel commercial-grade digital video recorder on a bracket behind the passenger seat. This system will record feeds from four video inputs simultaneously to a MicroSD card at 1280×720 resolution. The system runs 24 hours a day to capture everything that happens around the vehicle. The client can use this information to monitor the truck at night or protect himself from improper accusations in the event of an accident. The MicroSD card is locked into the chassis using a key to prevent other staff members from removing the card.

We started by installing an iBeam TE-CCV commercial-grade camera on the front grille of the truck. This camera is aimed forward to capture everything that happens in front of the vehicle while in operation. The second camera is an iBeam TE-CCS side-view unit that we mounted to the bulkhead above the passenger seat. This camera records the driver and motion in front of and beside the vehicle. The third camera is a unique solution called the TE-CCDL. This dual-lens camera is mounted on the rear of the truck above the door. One of the cameras is adjusted to point down so the driver can see how close objects are to the rear bumper and step. The other camera faces rearward and acts similar to that of the  rearview mirror to caption motion behind the vehicle.

The new radio gives the client the ability to see all of his cameras.

The Hertz amplifier was mounted securely with a metal bracket.

The next step was to upgrade the entertainment in the van. The client uses the vehicle to travel to and from client locations, but also as a mobile office. Being able to enjoy music while on the road will make anyone’s day go by faster.

We removed the factory radio to make way for a Sony XAV-AX210SXM digital media receiver. This radio features a 6.4-inch touchscreen display and offers Apple CarPlay and Android Auto smartphone integration. The client can use the voice recognition capabilities of his phone to place phone calls, send or reply to text messages or get navigation directions to his client’s businesses.

We connected the video output of the recording system to the Sony source unit so that the client can review videos without having to connect a laptop. The recording comes with an infrared remote that lets him pick the files he wants to watch or make adjustments to the system settings.

The preamp output of the radio feeds to a Hertz HCP 2 two-channel amplifier. We created one of our trademark steel amplifier mounting racks to secure the amp under the seat. The amp provides up to 65 watts of power to a set of Audison APK 165 component speaker sets. We installed this 6.5-inch speaker set in the stock locations in the doors and A-pillars. 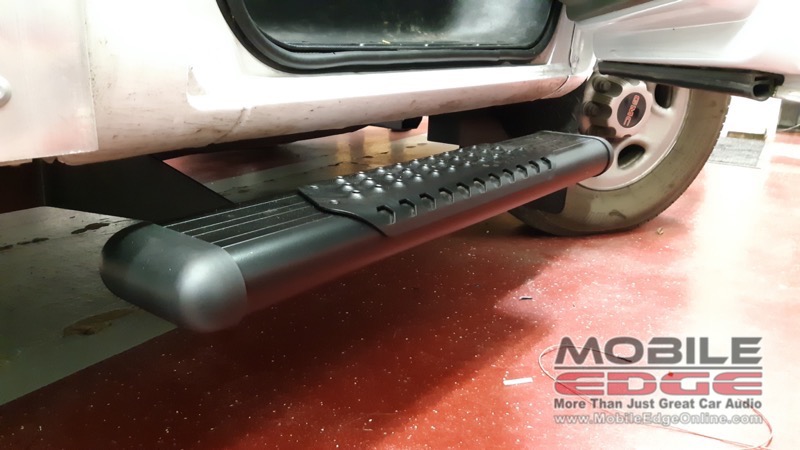 The truck step addition will help the client safely enter and exit the van.

Once we finished testing the camera system and setting up the new amplifier, we set to work installing a set of Luverne O-Mega II 6-inch tubular side steps on the vehicle. These heavy-duty steps have aluminum step pads with circular treads to ensure sure footing, even in the middle of winter. We finished with the installation of a set of DeeZee mud flaps behind the front wheels. These flaps will help keep the steps free of ice and slush and dirt off the side of the vehicle.

After just about three days of work, we had the upgraded audio system and safety solutions installed on this Savana work can. The client was thrilled with the upgrades! If you are interested in enhancing the functionality of your car, truck or van, drop by Mobile Edge in Lehighton or click the red icon below to send our team an e-mail.

Since 1994, Mobile Edge in Lehighton has been a specialist in mobile electronics, and one of our growing categories is motorcycle audio. Our team is … END_OF_DOCUMENT_TOKEN_TO_BE_REPLACED