(Update:  this client made a return trip in 2017 for another Mobile Edge remote car starter in another Lexus)

It’s not always the size of the sale that makes it special. This was hammered home very clearly this week when Mobile Edge had perhaps its coolest sale ever!  It all started in late February when we got a call from a gentleman looking for a remote car starter for his 2010 Lexus RX350.  He said that he had found us online and proceeded to ask a bunch of questions.  When asked where he was from he replied “Indiana.”  We are used to getting a lot of out of state calls since our website shows up well in a lot of searches.  Readers think that we are a manufacturer or a chain.  Most don’t realize that we are a small store located in Eastern PA!

I mentioned where we were located and he said he knew…. and that he was ready to set up an appointment for early May.  WHAT!????!! I asked if he had family around the area.  Nope.  Were they taking a trip that would lead them through the area?  Nope. Doing some quick geographic math in my head, I said that we had to be at least 500 miles away from him.  “648 to be exact,” was his answer!  Apparently he had already Google Map’ed us!  He went on to say that he enjoyed driving and this would be a little getaway for him and his wife.  I wrote up the invoice, took the deposit via credit card and said goodbye. 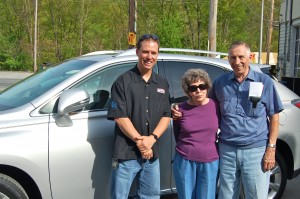 William and Sara Tracy from Greenwood Indiana along with Mobile Edge owner Mitch Schaffer. The Tracy’s made a 1300 mile round trip just to have Mobile Edge install a remote car starter in their 2010 Lexus RS350.

At this point I was really happy, but logic prevaled in my head and I suspected that this sale would probably get cancelled when they really thought about how far they were driving to get a car starter. I was 100% wrong.  On Monday evening, William Tracy from Greenwood, Indiana stopped in around 5pm.  His appointment was for Tuesday morning and he was just making sure that he had found us!   I couldn’t believe it!  We chatted for a while and I had to ask him why he was willing to drive 1300 miles round trip to have us put a starter in.  “You had a lot of great information on your site and you really seem to be the expert at remote car starters.  I want the best to work on my vehicle.”  What could I say to that except “Well thank you very much.  We appreciate it!”

At 10am the next morning, the vehicle was dropped off and William and his wife Sara took a ride to Jim Thorpe in their rental car.  They spent the day touring the area while Bob meticulously installed their car starter!  We try to be perfect on every job but this particular job had to be spot on.  They dont live around the corner after all! After about 6 hours of surgical quality installation, Bob had the Compustar remote starter professionally installed and we called the Tracy’s.

They arrived shortly after and we went over the workings of their new remote starter.  Of note is the fact that this 2010 Lexus had a factory remote starter in it already!  William didn’t like it.  He complained of poor range and sporadic function.  We chatted for a while and the Tracy’s were on their way back to the Hampton Inn to rest up for the long drive the next day!

On a personal note, I have to say that this is one of the most special sales that I have ever made.  The fact that our website and a phone call instilled this much trust and confidence in this customer is a great feeling.  I estimate that they spent about $225 on gas, $200 on motels, $75 on a rental car and who knows what else just to make the trip.  They did this because they viewed Mobile Edge as the premier destination to have a car starter installed.  We’ve had customers drive a couple hundred miles to get to us in the past, but this takes the cake!  We are truly humbled!

Since 1994, Mobile Edge in Lehighton has been a specialist in mobile electronics, and one of our growing categories is motorcycle audio. Our team is … END_OF_DOCUMENT_TOKEN_TO_BE_REPLACED