A client from Jim Thorpe recently dropped into Mobile Edge for some help with his Harley Davidson Road King Special audio system. He had installed a set of saddlebag speakers and an amplified MP3 player but wasn’t thrilled with the sound of the system. He wanted to add a set of lower front speaker enclosures and needed speakers for them. After Bob listened to the existing sound system and talked with the client about his goals, we put together an upgrade proposal that would deliver the performance the client wanted.

As with all our projects, protective plastic was used to cover all of the painted areas of the bike to avoid scratching.

The client’s choice of MP3 player/Amplifier did not have enough power for this bike.

All of the wiring was neatly secured and wrapped in protective cloth tape.

The small Memphis Car Audio amplifier was a prefect choice for this bike.

The little Shark SHKC6800N powered MP3 player he had installed claimed to be able to produce somewhere in the range of 800 to 1,000 watts of power. We knew right away that this rating was off by a factor of 10, and even then, we had serious doubts that it produced more than 15 to 20 watts per channel. After talking to the client, we removed the Shark amplifier with a plan to replace it with a real high-power Memphis Car Audio amplifier and media player.

We created a mounting panel for the four-channel Memphis Car Audio MXA4.45 powersports amplifier. Mike loomed the signal, power and speaker wires with automotive-grade cloth tape and routed them safely out of the saddlebag. The MXA4.45 is rated to produce a real-world 45 watts per channel when connected to a four-ohm load. This amp should produce about three times as much power as the unit it replaces. 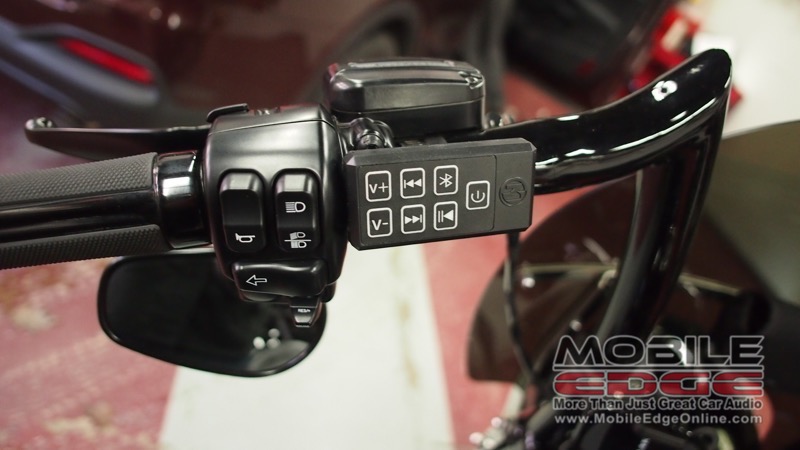 The client had mounted the control for the original media player on the gas tank. We proposed using a Memphis 16-SABTS Bluetooth streaming module as the source unit. This compact unit features Bluetooth A2DP audio streaming and an AVRCP remote control profile that lets the client change tracks on his smartphone without having to pull it out of his pocket. He can listen to music files he’s stored on the phone, or stream audio from an online service like Pandora, Tidal or iHeartRadio. Having the source unit controls on the handlebars will make the system safer to use.

Hertz marine speakers were just the thing to get this bike rocking!

The front speaker pods allow the addition of more speakers on this Harley.

The last component to install in this Harley Davidson Road King Special audio system was a set of speaker enclosures that are designed to bolt to the frame of the bike on either side of the radiator. Mike mounted the enclosures and installed a set of 6.5-inch Hertz HMX 6.5 C marine-grade speakers in them. These Hertz speakers are a perfect solution for motorcycle audio applications as they can handle getting wet and prolonged UV exposure.

Thanks to their compact size, the Rockford Fosgate speakers take up minimal space in the bags.

The grilles for the bag lids fit great!

The client had already purchased and installed a Rockford Fosgate TMS69BL14 rear audio kit. This kit is unique in that it allows the use of the stock saddlebag lid to mount the speakers. A template is included to show you where to cut the bag lids, and the kit includes a two-piece mounting bracket and grille that clamps around the opening in the lid. The TMS69 speakers included with the system are nice and shallow and don’t take up too much space in the bags. We aren’t a Rockford dealer, but we do think their rear speaker kits for Harley-Davidson cruisers are the coolest solution on the market. 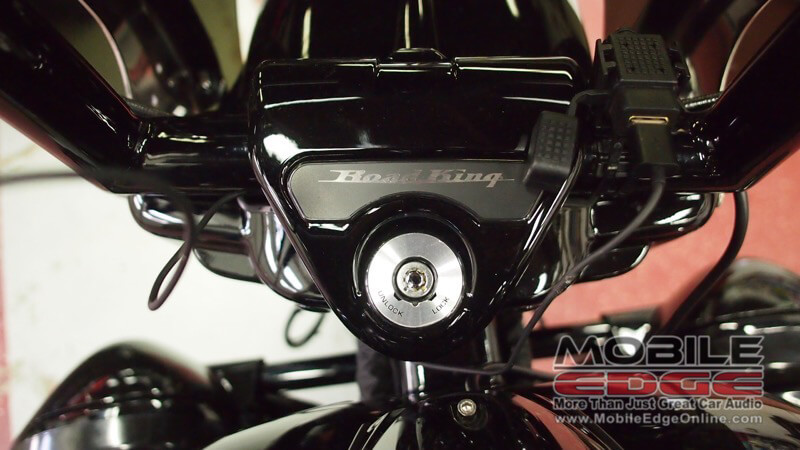 A USB charging port allows the client to charge his smartphone while riding.

As you can see from the photos, Mike did a great job concealing all of the wiring for the speakers and the remote for the SABTS source unit. All of the electrical connections are soldered, then protected from the environment and physical damage.

With the equipment installed, the last step was to set up the amplifier and make sure the system would be able to play loud and clear.

With the work complete, it was time for the client to audition the sound system for the first time. He was thrilled with the results. The extra power from the Memphis amp made a huge difference in being able to turn up the volume. The addition of the Hertz marine speakers on the front of the bike was the icing on the cake. If you are interested in upgrading the audio system on your motorcycle, drop by Mobile Edge in Lehighton and speak with Bob. If you have any questions, click the button below to send us an e-mail.

Since 1994, Mobile Edge in Lehighton has been a specialist in mobile electronics, and one of our growing categories is motorcycle audio. Our team is … END_OF_DOCUMENT_TOKEN_TO_BE_REPLACED