You are here: Home / OUR FACILITY / Mobile Edge 20th Anniversary Part 1: How It Started

The original design for the Schaffer’s Safe & Sound logo

20 years ago this Saturday, Schaffer’s Safe & Sound opened it’s door. The date was September 6, 1994. I haven’t shared many details of how this came about publicly before, but here it is… No holds barred… The successes and the failures… The good and the bad. Spread out in 3 articles over 3 days with a surprise on Saturday!

My father, Carl, was an electronics repair man.  He was well-known throughout the area as the guy to take your radios, VCRs, CBs and tape decks too when they stopped working.  He would remove the radios from his customer’s cars, repair them and then reinstall them.  Unfortunately, in the 1980’s he suffered a serious of heart attacks.  He could still do the repair work, but he could not crawl around under dash boards.  Lucky for him, he had a son that could easily fit under the dash and I quickly learned the right way to get radios in and out of a car.

Dad would pay me $5 to take a radio out and re-install it after it was finished.  And a lot of customers would give me a tip.  I was rich!  And it was the beginning of my lifelong love of car audio.

Back in the very early 1990’s, my cousin Mark owned a bar in Lehighton called Slamers (pronounced “slammers”). Myself, my other cousins, and some friends DJ’d there every weekend. There was the Maverick, Betty B., Bam Bam, The Ayatollah of Rock and Rollah (RIP) and The Iceman (that was me, don’t ask why.)

In 1992, Mark was rebuilding his DJ booth and I was helping out. We needed an XLR extension cable and the closest place that we knew we could find one was in Allentown. Mark mentioned that an electronics shop on 2nd street in Lehighton had just gone out of business. We knocked on the door and the owner answered. He told us that if we could find the cable, we could have it…

Mark and I walked into the basement and found the cable we needed for the DJ booth. On the way out of the basement, we saw a HUGE pile of car audio equipment…. Alpine, Infinity, Impact, QForms… There was a little bit of everything. Looking back, it was at that moment that Mobile Edge was born.

I asked the owner if he was willing to sell it as a lot and he said that I should make an offer. I took an inventory and I spent a few days figuring out what it was worth. I made the offer and he accepted it. The excess inventory was now mine. 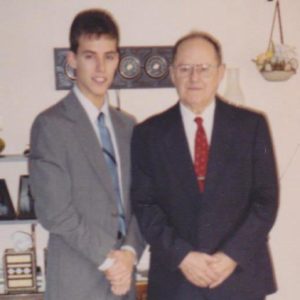 I placed a classified ad in the Times News and before you knew it, people were calling me to buy my inventory. I sold the products out of my parent’s basement and I installed it in their garage.  I sold the last piece of inventory on January 16, 1993, 1 day before my 22nd birthday. I knew there was a market.

Over the next few months, I spent my time looking for ways to buy inventory for my business. It was hard, but a couple of manufacturers and distributors decided to work with me. I continued my “day” job at the Times News during the day an installed car stereos at night. I was exhausted, but building the foundation for my business.

In April of 1994. I went to get a sandwich at the new Subway shop on Blakeslee Blvd. (Rt 443) in Lehighton. I saw a “For Rent” sign in the window near the gas station. I made a call and the next day my father and I met with a man named Pete Blynn. Pete was the property manager for the landlord. Looking back, Pete believed in me and my vision for my business. He made me an offer that I couldn’t refuse. But even with this great deal, I didn’t have enough money. Not even close.

I did what anyone with a dream and no money does: I asked for help. My mother Jean, my aunt Jeanette, and my uncle Dave allowed me to use a piece of land that was in our family as collateral for a loan. I thought the rest would be easy. I’d go to a bank and they would certainly loan me the money I needed. I couldn’t have been more wrong.

I went to 11 banks. I got rejected 11 times. 1 banker laughed at me (true story). They all said that loaning money to a 23-year-old with no business experience wanting to start a car stereo shop was too risky. My dad mentioned that many years ago, when he needed help, Mauch Chunk Trust Company had helped him. So I made an appointment and met with Melva McArdle. 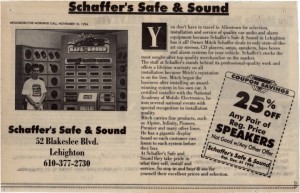 This was my first ever newspaper ad in the Morning Call announcing the grand opening.

Melva was the commercial loan officer at MCTC. She took me seriously, but boy was she tough! She made me prove that I was a good risk. Projections, business plans, market research, inventory analysis… When it was all said and done, I had nearly 100 pages of documentation. In the end, my loan was approved and with $30,000, Schaffer’s Safe and Sound was in business.

Part of my deal with my landlord required that I take over a struggling gas station, Boulevard Texaco, which I did on June 6, 1994. That Summer was tough! For almost 3 months straight, I worked 18+ hour days. With the help of my cousin Mark, we built the displays for Schaffer’s Safe & Sound and on September 6, 1994 Schaffer’s Safe & Sound, opened its doors…

The story continues in Part 2

Since 1994, Mobile Edge in Lehighton has been a specialist in mobile electronics, and one of our growing categories is motorcycle audio. Our team is … END_OF_DOCUMENT_TOKEN_TO_BE_REPLACED