You are here: Home / OUR FACILITY / Mobile Edge 20th Anniversary Part 2: The Peaks and Valleys And Building A Team

This photo was taken at our grand opening celebration on November 19, 1994. On the left is my original Alpine Rep, Scott Varner, myself, and Tim Small, the first rep that ever took me seriously!

(This is part 2 in a 3 part series celebrating our 20th Anniversary.  Part 1 can be found here.)

For the first year, I ran the business by myself.  I handled sales, installs, bills, inventory… I did it all.  Looking back it was the best thing I could have done since it allowed me to get a firm understanding on how everything worked. 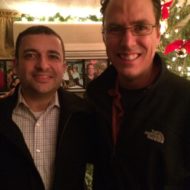 Mike and I at his 40th Birthday celebration earlier this year.

After a year, I decided that it was time to hire an employee.  A fellow named Mike Tarud applied for the job.  He was a recent graduate of the Luzerne County Community College Mobile Electronics course and had a lot of knowledge and energy and passion for the business.   Mike became employee #1.  Mike worked with me for several years.  He was a guy who “paid attention” to the details.  When his family moved to York, PA, he went with them and got a job working for the, now defunct, Tweeter.  He worked his way up the ladder and was soon the manager of 17 stores in the Chicago region.  After Tweeter folded, Mike spent 6 weeks driving cross-country.  He currently lives in the atlantic City area with his beautiful wife Lori.   I am proud to call Mike one of my very best friends to this day.

The roller coaster ride that was cellular phones

As the store grew, we expanded into new categories.  Perhaps the most important was wireless communications.  My store offered pagers from the beginning and our customer base grew to nearly 2000 active customers.  We also got into the mobile phone business.  What began as Cellular One, later turned into AT&T.  By today’s standards, these phones are dinosaurs.  You couldn’t even send a text!  We soon ventured into Nextel and became the largest dealer of Nextel phones in all of Carbon county.  Unfortunately, that business died…. and when it did, it almost took Mobile Edge with it (I’ll get to that in a bit). 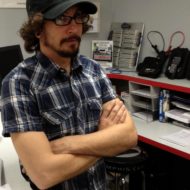 Dru was one of our very good installers a while back. He now is a successful musician and is living his dream!

Our pool of talent

Along the way, we employed a lot of talented people:  Brad Nevenglosky and Brian Peters were both very valuable employees and managers and contributed a lot to our early successes.  Nick Brungard was a skilled installer who specialized in remote car starters. Bill Post was a great guy to work with and a very talented graphic designer.  Bill designed the Mobile Edge logo that we still use today.  Dru Underwood was also one of the very good installers who called Mobile Edge their home for a time.

In 2003, I made my most significant hire: Bob Mickonis.  Bob came to me with limited experience in the industry but a desire to learn and broaden his skills.  He was reliable and friendly and our clients loved working with Bob. 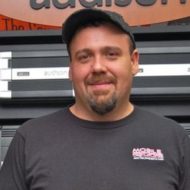 Bob Mickonis started at the bottom rung and worked his way up to store manager…. and more…

A year or so after Bob was hired, and with a lot of prodding from Brian, we decided to get into window tinting.  I brought in a trainer and we spent 3 days learning the ins and outs of window tint. Bob was the only one with the talent to do the job right.  We hit the ground running with window tint and were booked solid in no time.  There was a strong market for window tint in the surround area.  And then Bob came to me with some bad news…

It seemed that he had another offer in an entirely different industry that would allow him to make much more money.  Something inside me clicked and said that I needed to do whatever was needed to keep this fellow on my team.  I made him an offer that he couldn’t refuse and Bob was able to stay with me.  He moved up the ranks and became the installation manager for Mobile Edge. 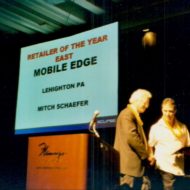 Receiving the 2003 Eclipse Retailer of the Year from our friend Ray Windsor at the Flamingo Hilton in Las Vegas.

How we almost lost it all… but didn’t

2003-2005 were the very best years for Mobile Edge up until that point.  Mobile phone sales were strong and the car audio industry was chugging along.  Mobile Edge had over a dozen employees.  We had just been named the 2003 Eclipse Car Audio Retailer of the Year.  We were advertising like crazy.  We couldn’t go anywhere without someone mentioning one of our radio or TV ads. Everything seemed perfect.  But then 2006 happened.

The bottom fell out of the wireless phone market for small shops like mine.  We went from selling over 150 units a month to under 10.  This was financially devastating. Right on top of that, there was tremendous downsizing in the 12 volt industry.  Shops and vendors were closing their doors. Crazy things were happening.  Tweeter failed.  Circuit City failed. Regional chains all across the nation were folding up.  Mobile Edge sales declined almost 75% in a six month span.

I had just a couple of weeks of reserves before I’d need to pull the plug.  For the first and only time ever, I voluntarily laid people off.  We got out of unprofitable categories and expanded the categories that were in demand.  I cut out ALL of our traditional advertising.  We were truly on life support.

The Internet – Don’t fight it, embrace it

The biggest thing to help us survive was how we got the word out about Mobile Edge.  I had recently discovered online advertising.   There is no argument that the internet hurt small, local, retail stores.  But I learned that if you embraced technology instead of fighting it, you could compete and win in a bigger market.  So I built the early version of the website you are on now and started to write informative articles to let people know about what we did.  Surprisingly, people started to call and tell us that they found us online and that they liked what they saw.   We started getting clients from far away.  Business rebounded quickly for us while most of our competitors were going out of business.

I soon became known within the mobile electronics industry for the work that I was doing online.  Other shop owners were calling me all the time asking for help with their marketing or their websites.  I spoke at industry conferences on the topic of online marketing.  Something was happening with this, but I just wasn’t sure what it was (More on this in part 3….)

A few things we are proud of 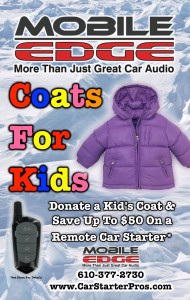 2008 was a great year for us.  Business was trending up again and we were named one of the top 12 retailers of our kind in the US.  We repeated this in 2009.  And then, in 2010, Mobile Edge… the little store in tiny Lehighton, PA…. was named the #1 retailer of it’s kind in the entire nation.  2011, 2012, and 2013 we were again among the top retailers.  We gained the support and respect of our peers and developed a tremendously talented network of friends in the industry.

Something else that we are very proud of at Mobile Edge is our annual Coats for Kids drive.  We started this in 2009 and to date we have collected well over 1500 children’s coats that are distributed in Carbon and surrounding counties.  To make this even more special, many other shops throughout the country have seen our success with this and started their own Coats For Kids programs in their markets.

Bob Mickonis was becoming increasingly important to our success.  He treated Mobile Edge like it was his own.  Our customers loved him.  While I can be quick to react, Bob is more thoughtful and level-headed.  I learned that Bob was a good balance for the shop (and for me).  We made a good team.  So a couple ago years ago, Bob was promoted to store manager. 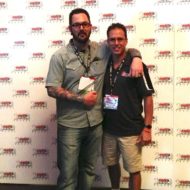 Our good friend Jon Kowanetz and myself shortly after Jon won the Retailer of the Year Award.

Remodel and expansion into fabrication

I make it a habit to attend an annual conference in Dallas Texas.  At the 2012 conference, I sat in on a seminar presented by my friends Jon Kowanetz and Josh Landau and I came home energized.  These fellows run some of the very best shops in the country and they have 2 of the best installation bays in the world.  After hearing what they had to say about running your install bay properly, I decided to renovate the entire bay.  Bob was on board with the plan.  We completely gutted our installation facility.  We installed all new EVERYTHING.  When we were done it was first-rate.  We installed a custom fabrication facility complete with everything that we need to fully customize the interior of a vehicle.   If you haven’t seen it yet, stop in!  We will be happy to show you around. 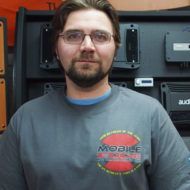 Michael Oechsner is our installation and fabrication guru.

About 2 years ago, I hired Michael Oechsner.  He came to me with a lot of installation experience, but more importantly a true passion for the industry.    He quickly became a key person in our install bay.  I recently promoted him to Installation and Fabrication manager.  He is extremely creative and talented and cares about Mobile Edge and our future.

It became very clear to me that this was the very best staff that I’ve ever had.  Just a few months ago this was hammered home.  Both Bob and Mike were named 1 of the top 100 installers in North America.  There are only 2 installers on that list in all of PA and they both call Mobile Edge their home…..
The team was in place……..

Tomorrow we present part 3 in our series with a very special announcement.

Since 1994, Mobile Edge in Lehighton has been a specialist in mobile electronics, and one of our growing categories is motorcycle audio. Our team is … END_OF_DOCUMENT_TOKEN_TO_BE_REPLACED