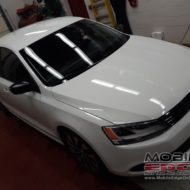 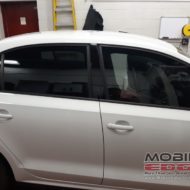 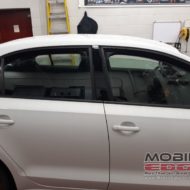 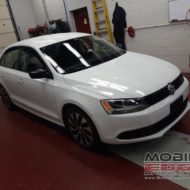 A repeat client from Summit Hill contacted our team about adding some privacy to his 2014 Volkswagen Jetta by using window tint. The work we had done on his other vehicles had given him confidence in choosing us to upgrade his Volkswagen.

Privacy was his main concern, so we chose a 35% grade of 3M Color Stable window film. The carbon-black color of this film is a stark contrast and looks beautiful against the Candy White paint on his Jetta. That color also eliminates the possibility of the film ever turning purple in the future.

In addition to its rich black color, the film can reject up to 57% of the solar energy trying to penetrate the interior of the vehicle, and blocks harmful UV rays.

We added a strip to the windshield using the same film, to cut down on glare while the client is driving.

To learn more about our window tint options, we invite you to click the button below or give us a call to schedule your in-store consultation.

Since 1994, Mobile Edge in Lehighton has been a specialist in mobile electronics, and one of our growing categories is motorcycle audio. Our team is … END_OF_DOCUMENT_TOKEN_TO_BE_REPLACED