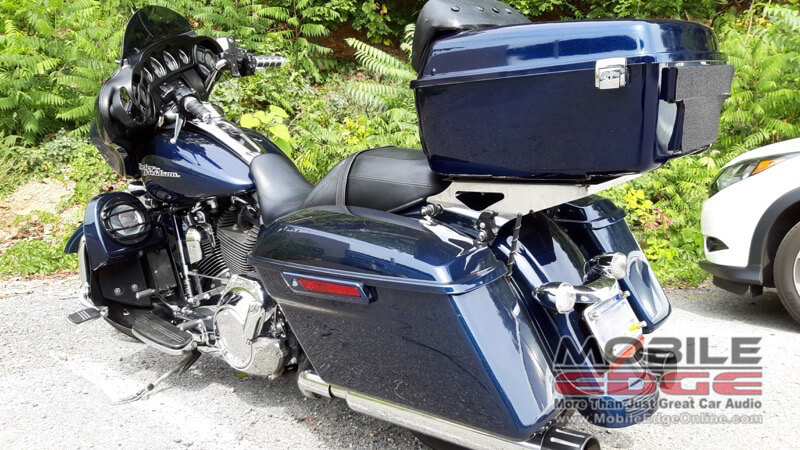 A client from Wilkes Barre recently dropped by Mobile Edge with his 2014 Harley-Davidson Street Glide to inquire about upgrading the speakers. A while back, we had installed a set of Hertz powersports speakers in the fairing of this motorcycle. He loves the new speakers but wanted the system to play even louder.

Our first upgrades on this bike were a set of modified Hertz speakers.

The wiring for the pods was neatly routed in the tubing.

Protective tape was added to the speaker wires to protect them from damage.

The client brought us a set of lower speaker pods that would be bolted directly to the tubular engine guard. The enclosures came with a set of inexpensive speakers, but the client knew he wanted us to install a second set of the Hertz HMX 6.5 S speakers to match what we had integrated into the fairing.

The client was particularly concerned about the wiring — he wanted it to be as invisible as possible. After looking at how the enclosures fit with the tubular steel bracket, we came up with a plan to give him the sound and appearance he wanted.

We drilled four small holes in the engine guard and fished 16-AWG Audison Connection speaker wire through the bar and had it exit on either side of the down-tube. At the other end, the wire exits the bar just beside the mounting clamp and feeds into the lower part of the enclosure. We wrapped the wire in exterior-grade cloth tape to protect it and help it blend with the rest of the bike. Of course, we used press-in grommets on all the holes in the guard so that the wiring won’t ever chafe or fray. 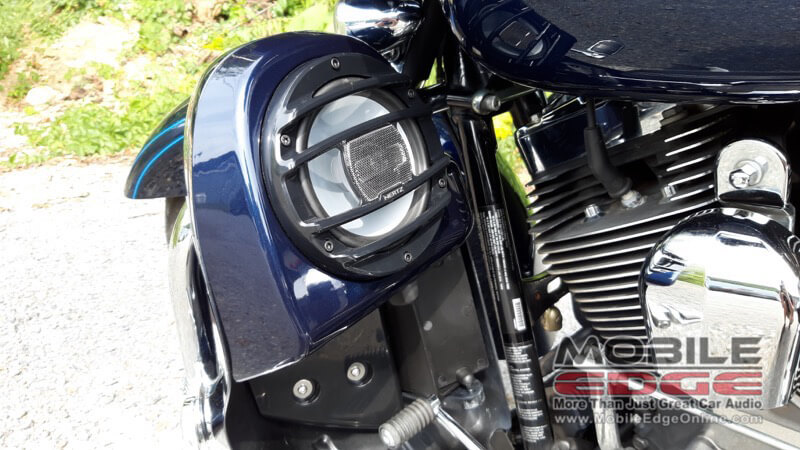 The rugged construction of the Hertz HMX speakers made them the perfect choice for this Harley.

For the Hertz speakers to fit, we constructed a set of spacers out of HDPE plastic. After we milled them on our router, we finished the wiring and bolted the HMX 6.5 S speakers to the enclosure covers.

The client has a Hertz HMP 4D amplifier installed in the fairing from the previous project. We rewired the amp to power all four speakers with up to 60 watts each instead of the 150 watts per speaker configuration. Having the power distributed among more speakers dramatically reduces distortion at high volumes and improves the clarity and detail of the system.

With the enclosures mounted, wires run, speakers installed and wiring reconfigured, we finished the project by setting the level controls on the amp to ensure that the system would play nice and loud. The client returned to Mobile Edge in Lehighton to hear his Harley speaker upgrade and was thrilled with the improvement! If you’re interested in getting better sound on your motorcycle, drop by our store or click the button below to schedule a personal consultation.

Since 1994, Mobile Edge in Lehighton has been a specialist in mobile electronics, and one of our growing categories is motorcycle audio. Our team is … END_OF_DOCUMENT_TOKEN_TO_BE_REPLACED